Vivenna is an Awakener and eldest princess of Idris on Nalthis. She visits Roshar searching for Vasher and infiltrates Kholinar as Highmarshal Azure, commander of the Wall Guard.[3] 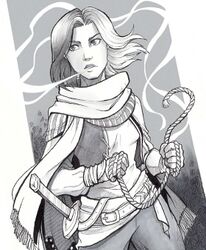 by Shuravf
Awakening a rope

Described as beautiful by her sister Siri[4], Vivenna is the tallest of the Idrian princesses.[5] As a member of Idrian royalty, she is descended from a Returned and thus is capable of changing the color of her hair, with conscious effort or subconsciously to reflect her emotional state.[6] She is mentioned at being exceptionally good at this skill, and even her father Dedelin, the king himself, is surprised at her ability to stay so unemotional and keep her hair black.

In the beginning of the novel Warbreaker, Vivenna wears a simple grey dress and keeps her hair in a knot, due to her strict adherence to Idrian beliefs. She maintains a solid black color in her hair.[4] As the novel progresses and she finds herself in T'Telir, however, she begrudgingly begins wearing more colored and revealing dresses out of practicality. She cuts off her hair to sell it[7] and is never mentioned growing it back. By the end of the novel, she wears thick trousers, a tunic, and a vest, all different shades of blue, and carries a sword at her waist.[8] She is also mentioned to have lost, or at least does not bother with, the ability to keep her hair at one set color, and mostly just lets it change to match her feelings.

Vivenna also appears as Highmarshal Azure on Roshar. She looks to be a lean[9] Alethi woman in her mid-thirties[10], with light[11] orange eyes and straight black hair[3] reaching halfway down her cheeks. She is slightly shorter than average height by Alethi standards and wears gloves on both hands.[9] Two scars[9] cross her face.[12] She also wears an azure cloak, with a mail coif around her neck, and has a helm that she often carries in her hand. She wears her blade as a side-sword.[9] At times, she wears her cloak partially wrapped, partially draped around her left arm.[13][14]

She began as a statuesque, uptight, judgmental, and devout adherent to Idrian dogma. After her experiences in T'Telir, however, Vivenna's worldview and personality are fundamentally changed, as exemplified in her choice to become an Awakener and travel with Vasher. She used to look down on the Hallandrens; however, later she notes that she does not really care about them anymore, and that her hatred was caused by their inherent indifference towards the Idrians.

Due to getting captured by Denth, whom she viewed as a friend and spent weeks with, Vivenna gradually loses her haughtiness and starts to realize that she was being unfair. She begins to want to learn so that she will no longer be helpless. She does not wish to be powerless any longer and learns Awakening after realizing that it had nothing to do with her Idrian beliefs. After realizing that Vasher is an exceptional Awakener with highly technical knowledge, she realizes that judging people by their appearances does not make any sense.

Gradually, Vivenna becomes a capable young woman who even realizes that rulership is not for her. She gives up her throne to her siblings and travels with Vasher.

During her travels through Shadesmar after the Battle of Kholinar, Adolin Kholin berates her for not doing her duty to her kingdom, and she tells him that that is the one thing she does not regret.

She is trained to be an Awakener by Vasher, and as part of the Idrian royal line, also has the Royal Locks. This is the ability to change her hair color and length.[16] She is also able to change other aspects of her appearance such as her eye color and giving herself scars.[citation needed]

As the first daughter of the king of Idris, Dedelin, she was trained to marry the God King of Hallandren from a young age, as according to the peace treaty between their respective nations. At the age of twenty-two, she was to be sent to T'Telir to marry him. However, Dedelin's love for his first daughter caused him to instead send Siri, of whom he was less fond.[4] 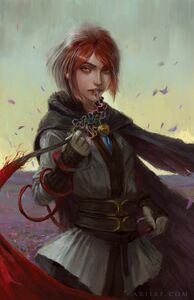 Vivenna left her home and attempted to rescue Siri from her marriage with Susebron.[17] After arriving in T'Telir, she looked for the Idrian's informant, Lemex. Instead, she met Denth and Tonk Fah, who were posing as mercenaries. They led her to Lemex, who had not advised her father that he was deathly ill. Before his death, Lemex transferred his Breath to Vivenna against her will, bringing her to the Third Heightening.[18] Lemex's mercenaries told her that their contract with Lemex had not concluded and she was their new employer.[19] Unbeknownst to the princess, they had the ulterior motive of inciting conflict between Idrians and the Hallandren for their true employer, the Pahn Kahl scribe Bluefingers. With their "help", Vivenna spent many weeks in T'Telir inadvertently stirring the Idrian community into a rebellion against the Court of the Gods.[8]

Vivenna was later kidnapped by Vasher, who was seeking to prevent the mercenaries from realizing their goal, but she escaped. After she managed to return to the safe house, she discovered the truth of her time with the mercenaries after finding Parlin's tortured corpse, dead Idrian soldiers, and various animals' corpses. She then encountered the mercenaries as they truly were.[20]

Once again, Vivenna escaped to the streets, but not before losing many of her Breaths in a futile attempt to Awaken a cloak.[20] On the run, she became a drab to avoid detection in the Idrian slums, where she was forced into poverty, but kept a shawl that held the Breath she still owned. Eventually, she was nearly captured by Denth's henchmen, but was rescued by Vasher.[21][22]

In an unfamiliar situation, and with her worldview shattered, Vivenna decided to begin learning to Awaken from the grizzled Returned, learning much more quickly than most others due to her experiences as an Idrian royal. Vivenna and Vasher worked together to repair some of the damage she had caused in the company of Denth and Tonk Fah. They contacted the Idrians in T'Telir and tried to convince them not to go to war or to incite the Hallandren forces. However they both remark that these efforts are not enough as they can see the war is becoming inevitable.

As events climaxed in the Court of the Returned, Vivenna took action and helped prevent the start of another Manywar. After reuniting with her sister, Vivenna chose to travel with Vasher and participate in his adventures, beginning with his investigation of Yesteel's return.[2] 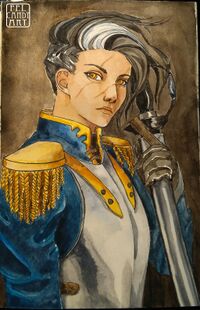 “I'm no figure from mythology, thank you very much. I’m just a woman who has been constantly out of her league since adolescence. ”

Vivenna traveled through Shadesmar to Roshar about one year prior to the True Desolation, searching for Vasher and the sword Nightblood.[24][25] After Queen Aesudan withdrew to the Kholinar Palace, she became the Highmarshal of the Wall Guard in Kholinar. When she took command of the Wall Guard, she also secured a monastery with a Soulcaster. Around this time, she was approached by Hoid, who gave her metal panels, likely made of aluminum, that prevented the voidspren from detecting the use of Investiture.[26] Combined, those two things allowed her to keep the Wall Guard fed and provided a small amount of food for the city.

Vivenna joined in the assault on the Kholinar Palace and traveled to Shadesmar with Kaladin, Shallan, and Adolin. She left their company to help defend the ship while the others escaped. Her fate is unclear, though if she survived she would have headed for Cultivation's Perpendicularity.

On Roshar, she carries a strange Shardblade that does not have a gem in its hilt and does not appear capable of appearing and disappearing. It is somewhat related to Nightblood and shares some of its features, though the two blades are also quite different, and is probably a Type IV BioChromatic entity like Nightblood.[27][28]

She is the daughter of King Dedelin of Idris, and sister of Siri, Ridger and Fafen.[4] She was the intended wife of Susebron, the God King of Hallandren, as well as a lifelong friend and potential partner of Parlin, as their fathers were great friends before them.

She spends some time travelling with Vasher.

This article is still missing information. Please help The Coppermind by expanding it.
Retrieved from "https://test.coppermind.net/wiki/Vivenna?&oldid=138083"
Categories: