For a chapter by chapter summary, see /Summary.

A few months after the library infiltration, Alcatraz waits in an airport for Grandpa to finally take him to Nalhalla. Librarian agents, including a strange half-man, half-machine Librarian, catch up to him and he narrowly escapes on a glass flying machine shaped like a dragon.

On the vessel are Bastille, her mother Draulin, another cousin, Australia, and his uncle Kaz. Bastille has been demoted to squire because of her failure in protecting Alcatraz. Her mother is the new knight sent to protect them. Alcatraz learns via a set of Courier's Lenses that his Grandpa is at the Library of Alexandria looking for his father. They are suddenly attacked by an F-16 piloted by the same creature at the airport. Alcatraz breaks the F-16 and the Dragonaut but they manage to crash land.

Kaz uses his Talent for getting lost to lead the group to the Library. Alcatraz finds a note from his grandpa, and they debate whether to go in. Just then the creature shows up again and attacks, and they have no choice but to enter the Library. The creature is a Scrivener's Bone using blood-forged Lenses.

Unfortunately, the entire team is split up and surrounded by undead Curators who do anything possible (and within their rules) to trick a visitor into checking out a book and becoming one of them. Alcatraz does find Bastille, then Kaz joins them because they were lost, and it's pretty easy for him to find lost people with his Talent.

As they wander about looking for Australia, Alcatraz finds a wall that is glowing with power and breaks through to the other side. He finds a sarcophagus and learns from writing on the wall that the Talent of Breaking is the most powerful and dangerous of the Smedry Talents. Inside the sarcophagus is the body of Alcatraz the First, the first holder of the Breaking Talent. He has gifted a Lens that can only be claimed by a descendant with the Breaking Talent. Alcatraz takes the Lens but can't figure out what it does.

Suddenly, Bastille starts running, and Kaz and Al give chase. They run into the Scrivener's Bone, Kilimanjaro, who holds Draulin's sword and Fleshstone. He convinces Alcatraz to trade the Translator's Lenses for the Fleshstone, then triggers a trap, catching Bastille and Alcatraz. Kaz takes the Lenses to the center of the library for the trade.

Bastille and Alcatraz are caught in a pit when Australia shows up. They try to get out, but all attempts are fruitless until Bastille suggests using the Windstormer's Lenses to blast them out. They head for the center of the library, Alcatraz using the Discerner's Lenses to follow the "trail" of older and older books. 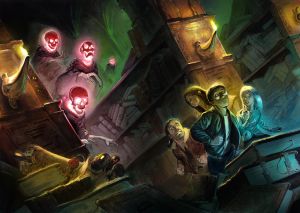 They find Kiliman and start to fight him, again without much effect -- he's just too strong. Australia has used her Talent and fallen asleep and woken up as a Curator, allowing her to sneak over and release Kaz from his bonds. Alcatraz manages to get the Fleshstone, which he tosses to Kaz, and he leaves with Draulin and Australia.

Alcatraz and Bastille start to flee, but Kiliman promises to hunt him down, so they turn and fight. Alcatraz tricks Kiliman into taking a scroll off the shelf, and the Curators claim him.

With the powerful Librarian gone, he can finally do what he came for: find his father (and grandpa). He uses the Tracker's Lenses to find Grandpa in a room filled with the personal effects of those who have become Curators. He reveals that Attica has indeed been foolish enough to read a book and lose his soul. Shasta has already been there and claimed the possessions of Attica as next of kin. However, Alcatraz figures out that his father could have written something before being taken, and he demands the writing from the Curators. Attica has willed his soul to Alcatraz, and Al demands it. Attica comes back to life.

For a cover gallery of The Scrivener's Bones, see /Covers.

This meta article is still missing information. Please help The Coppermind by expanding it.
Retrieved from "https://coppermind.net/wiki/?title=The_Scrivener%27s_Bones&oldid=130827"
Categories: