“Tanavast was a fine enough fellow - bought me drinks once - but he was not God. ”

Tanavast was the original Vessel of the Shard Honor.[5] 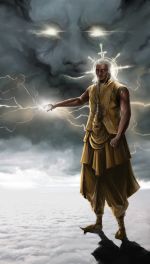 “He loved humankind. He died defending you. ”

In one of Dalinar Kholin's visions, he appeared as a tall muscular man with dark skin and pure white hair, wearing billowing trousers and a waist-length coat, both of which seemed to be made of gold. Dalinar considered this clothing strange, which may indicate that it was from Yolen—or it may simply be a reflection of how style had changed since Tanavast recorded the visions.[7]

Little is known about Tanavast as a person, but the people who met him have an excellent opinion of him. He seems to be the only Vessel with whom Hoid has a good relationship, and is, aside from Ati, the only one Hoid ever praises, calling him a decent person.[4] The Stormfather insists that Tanavast did love mankind, even dying to defend them.[6] Tanavast himself seems to have been highly dedicated to his role as a deity and protective of humanity, even apologizing in visions for getting himself killed.[7]

As a Vessel, Tanavast originally held as much power as his peers.[8] At some point, however, he was weakened enough that, even with Cultivation's assistance, Odium was able to kill him.[9] Like other Vessels, he had Shardic future sight, though it was not as strong as that of Cultivation.[7] 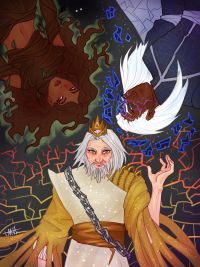 At some point in the past, likely prior to the Shattering, Tanavast met Hoid, and left a good impression on him.[4]

Tanavast was one of the sixteen people who shattered Adonalsium, after which he Ascended as the Shard of Honor.[10][5]

After the Shattering, Tanavast and his lover, Cultivation's Vessel,[11] moved to Roshar,[12] and both Shards Invested equally in the planet.[13]

To counter the Fused, he formed the Oathpact with the ten Heralds, which bound the Fused to Braize after death. The Oathpact is also part of what keeps Odium captive on Braize where he could not splinter other Shards.[14][15][expand]

Sometime before the Day of Recreance, he passed responsibility for creating new honorspren to the Stormfather. When the last generation of Knights Radiant discovered that humans were the invaders on Roshar, he did not support them as he had past Radiants, but instead raved about how they would destroy the world.[16] Sometime after the Recreance, he recorded several visions for the Stormfather to show to Bondsmith candidates,[17] and was later killed by Odium when Honor was Splintered.[7][1]

This article is still missing information. Please help The Coppermind by expanding it.
Retrieved from "https://test.coppermind.net/wiki/Tanavast?&oldid=140544"
Categories: