“Roshar (which--characteristic of the dominant confidence of its people--is the name of a planet, a system, and the main continent on the planet) is a busy place. As empty as the Scadrian system seems, this one always feels crowded to me. ”

—From Khriss' essay on Roshar[1]

The Rosharan system, also known as Greater Roshar, is the name given to the planetary system containing the Shardworld called Roshar.[1] It comprises thirteen planets, three of which are inhabited, as well as the usual asteroid belt, and three moons for a total of sixteen orbital bodies -- an important number in the cosmere.[2]

Ashyn
This is where The Silence Divine is set. While there are humans inhabiting this planet, a global cataclysm at some point in the past has forced most of its inhabitants to flee to Roshar, while the remainder lives in floating cities in the sky. The cataclysm was likely caused by overuse of Surges by Ashynites, and has left the surface highly volcanically active. There is a known manifestation of Investiture on Ashyn, based around Surge-granting diseases, but no known Shard.[3] 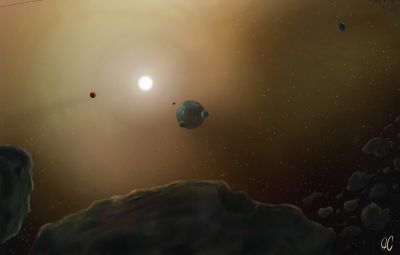 Roshar
The second planet is the eponymous Shardworld of Greater Roshar, and the primary setting of the Stormlight Archive. The Shards of Honor and Cultivation can be found here. Roshar features a single supercontinent, also called Roshar, on which its inhabitants live. Three moons, Salas, Nomon, and Mishim, orbit the planet. The majority of Roshar's sentient lifeforms lives on Roshar.

Braize
A cold planet, perhaps outside the habitable zone. While no humans live here, there do exist self-aware Splinters that inhabit either the planet or its Cognitive manifestation.[1] Braize is where the Shard of Odium resides.[4] In Rosharan mythology, Braize is referred to as Damnation, and is where Rosharan Heralds returned to between Desolations.[5]

Beyond the asteroid belt are ten gas giants. These outer planets, which are designated by Vorin numerals, are Jes, Nan, Chach, Vev, Palah, Shash, Betab, Kak, Tanat, and Ishi, in order of increasing distance from the sun. The Rosharan gas giants have a minor presence on Shadesmar, which indicates that they are uninhabited. None of these planets have moons or ring systems.[2]

In the greater Cosmere, Rosharan system lies between Taldain, Scadrial, Nalthis and Sel, and is the closest to the latter. It is one of the stars in the Knight constellation.[6][7] In Cognitive Realm, Shadesmar is surrounded by four Expanses, of which the Expanse of the Vapors leads to Scadrial, while the Expanse of the Densities leads to Sel. The Expanse of Vibrance[8] is believed to lead to Nalthis.[9] It is currently unknown which Shardworld the Expanse of the Broken Sky corresponds to.[10]

Rosharan system is inhabited by a number of sentient species. This includes humans on both Ashyn and Roshar; Singers, Siah Aimians and the Sleepless on Roshar; and a vast number of sentient spren. Braize also contains a large population of Cognitive Shadows of Singers, called the Fused, who migrate to Roshar during Desolations.

It is likely Roshar saw several human immigrations, as the Iriali might be later arrivals than other Rosharan humans.[11]

The Rosharan system was created prior to the Shattering, and was crafted directly by Adonalsium.[12] The Rosharan spren Stormfather and the Singers likely predate it as well.

After the Shattering, the Shards Honor and Cultivation settled on Roshar, becoming the gods of Singer people. Humans initially settled on Ashyn, but following the destruction of its environment, migrated to Roshar, and were granted the land that comprises modern Shinovar. The Shard Odium arrived on Roshar alongside them, and while the Singers believe it to be the human god, the exact relation is unclear.[13] Honor trapped Odium in the system by unknown means, and the shard settled on Braize. However, when the relationship between humans and Singers deteriorated to the point of war, Odium took the Singers under his wing, creating the first Fused and starting the cycle of Desolations, periodic invasions of Roshar.[14] During that time, Honor was killed by Odium, but his pact with Odium, along with the Oathpact that governs the Desolations, prevented Odium from leaving the system.[15]

Over the past 4.5 thousand years, the Rosharan system has enjoyed a period of relative stability, although this ended with the start of the True Desolation.

Several of Rosharan system's celestial bodies have legends associated with them.

Ashyn, though not known by that name to Roshar's inhabitants, is likely the Tranquiline Halls, the mythological homeworld of mankind in the Vorin creation myth. Rosharans believe that after death, they will fight to reclaim them from the Voidbringers, and that this is where the Heralds departed to following the Aharietiam. Braize, on the other hand, is a known name for Damnation, the place where, in Rosharan myths and legends, Voidbringers live. In Vorin cosmology, Damnation is the afterlife for particularly wicked souls.[16]

For the full Natan myth about Mishim, see Tsa.

Many Rosharan cultures personify the three moons as semi-divine beings. In Shinovar, they are known as the Three Sisters, with Salas being the First Sister, Nomon the Second Sister, and Mishim the Third Sister. In Natanatan, Nomon is considered to be male.

A particular myth from Natanatan concerns the latter two moons and the local queen, Tsa. In the story, Mishim (characterized as young and impulsive) wishes to experience human pleasures, and attempts to persuade Tsa to swap places with her. Tsa eventually relents, agreeing to take Mishim's place for one night. However, Mishim fails to return before dawn, and fears that Tsa will tell her older siblings about the ruse. The following night, she attempts to go back, only to find out that Tsa enjoys her time in the night sky too much to switch back. While Mishim manages to convince Tsa to return, nine months later the queen gives birth to a blue-skinned child. Mishim realizes that she's been conned, and Tsa wanted to visit the night sky all along, as she wished to lay with Nomon.[17]

The legend serves as an explanation for the Natan people's unusual skin tone.

This page is probably complete!
This page contains most of the knowledge we have on the subject at this time.
It has yet to be reviewed.
Retrieved from "https://test.coppermind.net/wiki/?title=Rosharan_system&oldid=141822"
Categories: