This page or section needs to be updated with new information for Oathbringer!
Be aware that in its current state, it may not include all additional content yet.

The Physical Realm is the realm of existence in the cosmere that contains what is perceivable to the physical senses.[1] Of the three Realms, it is the most readily understood, as it behaves in much the same way as our universe does.

Most of the cosmere stories so far take place almost exclusively in the Physical Realm. These stories are set on planets orbiting stars that are part of a small cluster within a dwarf galaxy.[2][3]

This article lists all the known celestial bodies in the cosmere as they appear in the Physical Realm, including planets, stars and moons.

The Selish system orbits a yellow star named Mashe. There are five planets in this system: two within the habitable zone, then two gas giants named Ky and Ralen, and finally an unnamed dwarf planet.

Donne is the closest planet to the sun. While it is in a habitable region, it is barren and suffers from terrible dust storms.[4]

The second planet from the sun, Sel was an Earth-like Shardworld inhabited by humans and artificially created beings called seons and skaze. The planet was the location of Elantris. Sel was dominated by the Fjordell Empire, with Arelon and Teod being the only remaining free nations. All these nations (except Teod which is located on a continent to the north) were situated on the continent of Opelon (named Sycla by the Fjordell Empire).[4][5]

The planet was created by the Shards Ruin and Preservation. The orbit of the planet has been changed by people using Investiture. Its size and gravitation are 1.0 cosmere standard.[6]

The Taldain system is a binary system. The two stars in it are a weak white dwarf star surrounded by a particulate ring and a blue-white supergiant.[7]

Taldain is a tidally locked planet. It is the only planet in this system.

Threnody, the third planet in the Threnodite system, is the minor Shardworld that contains the Forests of Hell. It is the setting for the story Shadows for Silence in the Forests of Hell. It has many features that are similar to Earth, including forests, mountains and oceans. Silver seems to be a fairly common resource on the planet, but because of its importance to survival, it is still finite and valuable. It has no moon.[8]

The Drominad system has seven planets. There are four planets in the habitable zone, three of which have developed human societies. An asteroid belt lies just beyond these planets. Then there are three gas giants. All these planets are named for their position from the sun (First of the Sun, Second of the Sun, etc.).[9]

Main article: First of the Sun

First of the Sun is a minor world consisting mainly of an large ocean and island systems.[citation needed] It has no shards residing on it.

Greater Roshar is a planetary system containing thirteen planets. Some have life, sentient and not, others are barren. There are three planets in the habitable region and ten gas giants. The gas giants are named after Vorin numerals.[10]

Ashyn is a minor shardworld that has sentient life.[11] It is the first planet from the system's sun.

The book The Silence Divine is set here.[11] The magic system involves people who gain magical powers from diseases.[12]

Roshar is the second planet from the Rosharan system's sun. It has a gravity of 0.7, a year 500 days long, with each year being 1.1 earth years. The planet consists of one large super continent.

Roshar has three moons. The first moon is Salas. It is violet, and is the smallest moon. The middle moon is Nomon, which is a bright, pale blue. And the final moon is Mishim, which is small and green.

Braize is the third planet from the sun. Odium settled on Braize, although he is still affecting Roshar. Braize is unlikely to get its own books, but scenes from The Stormlight Archive will be set on Braize.[citation needed]

Braize is known to the Vorin people as Damnation.

The Nalthian system orbits a yellow star. There are three planets in the system: Nalthis, the gas giant Farkeeper the Bright, and the dwarf planet Nightstar the Hidden. Much farther from the star, there is a comet belt. There is also a Cognitive Anomaly in Nalthis' orbit.[15]

On Nalthis, T'Telir is the capital city of Hallandren and its bordering mountain state of Idris. The jungles are situated in a large valley surrounded by mountains and a sea.

Yolen is home to three sentient races[16] and was the origin of all humans in the cosmere.[2] The original sixteen shardholders were from Yolen.[16]

Nothing is known of Vax, its peoples, or any Shards that may or may not be located there. All that is certain is that it has a manifestation of Investiture.[17]

Little is known of Obrodai, but Autonomy has claimed it, manifested an avatar there, and warned Hoid against returning.[18] 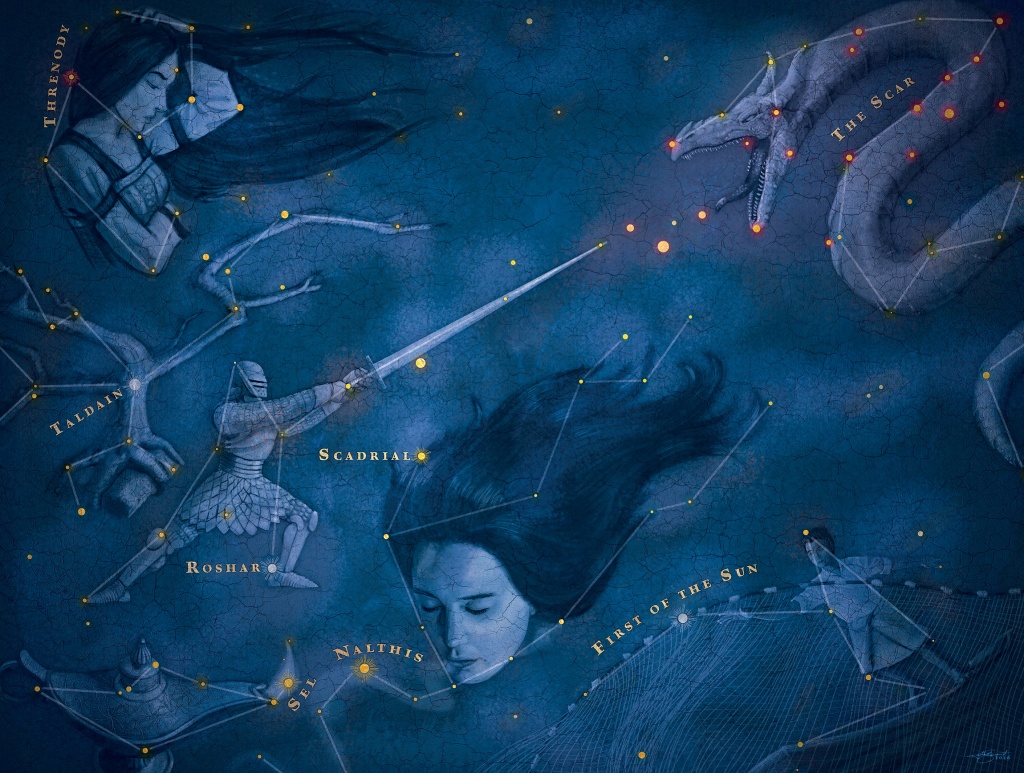 The Starbelt is an unusually bright patch of stars in the sky of Threnody.[19] It is useful for navigation in the Forests of Hell during the night; the light usually filtered through the trees fairly well.

Taln's Scar is a great swath of red stars that stand out against the white ones.[22]

The Tear is a particularly bright star in the Rosharan sky. It's name comes from the single tear shed by Reya in Rosharan Mythology.[23]

Mashe is the star around which Sel and several other planets orbit.[4]

This article is still missing information. Please help The Coppermind by expanding it.
Retrieved from "https://test.coppermind.net/wiki/?title=Physical_Realm&oldid=137881"
Categories: