This page or section contains spoilers for Rhythm of War!
This information has the ability to potentially ruin elements of the plot for the reader. Proceed with caution if you have not read this book.
This page or section needs to be updated with new information for Oathbringer and Rhythm of War!
Be aware that in its current state, it may not include all additional content yet.
This article deals with the Order of Knights Radiant. For the Rosharan variant of the Lightweaving magic system, see Surgebinding#Illumination. For the original Yolish variant, see Lightweaving.

“These Lightweavers, by no coincidence, included many who pursued the arts; namely: writers, artists, musicians, painters, sculptors. Considering the order's general temperament, the tales of their strange and varied mnemonic abilities may have been embellished. ”

The Order of Lightweavers is an order of the Knights Radiant on Roshar.[1]

The Lightweavers are Surgebinders who use the Surges of Illumination and Transformation, commonly called Lightweaving and Soulcasting. They are associated with the garnet polestone, and form a Nahel Bond with Cryptics. 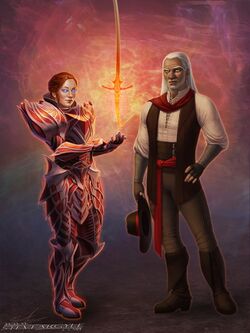 “Malchin was stymied, for though he was inferior to none in the arts of war, he was not suitable for the Lightweavers; he wished for his oaths to be elementary and straightforward, and yet their spren were liberal, as to our comprehension, in definitions pertaining to this matter; the process included speaking truths as an approach to a threshold of self-awareness that Malchin could never attain. ”

The Ideals of the Knights Radiant, also known as the Immortal Words, are a set of rules by which the Radiants live. The First Ideal is shared by all of the orders, and is used as a motto for the Knights Radiant as a whole. Each of the orders then has an additional four Ideals that are unique to that order.[3] The Ideals of the Order of Lightweavers are very different from those of the other orders. Instead of swearing oaths centered around a specific theme, Lightweavers instead speak individual truths about themselves. Some have theorized that Lightweavers' progression is tied to truth like this because their actions frequently blur the line between truth and lies and they need to learn to distinguish the two. It has also been posited that their more flexible Ideals are because they are closer to Cultivation than Honor.[4]

“Life before death, strength before weakness, journey before destination. ”

—The First Ideal of the Knights Radiant[3]

“I'm a murderer. I killed my father.”

“I killed her, My wonderful beautiful kindly spren.”

—A truth as spoken by Shallan

If Elhokar had lived long enough to speak his first Truth, it would be to admit that he was a bad king.[7]

“As to the other orders that were inferior in this visiting of the far realm of spren, the Elsecallers were prodigiously benevolent, allowing others as auxiliary to their visits and interactions; though they did never relinquish their place as prime liaisons with the great ones of the spren; and the Lightweavers and Willshapers both also had an affinity to the same, though neither were true masters of that realm. ”

The Lightweavers use the Surges of Illumination and Transformation.

The Lightweavers also have the ability to enter Shadesmar, yet they do not possess the surge of transportation. Exactly how this works has not yet been revealed.

It was also noted by the author of the in-universe book "Words of Radiance" that the members of this order had strange and varied mnemonic abilities which is a kind of Resonance. Shallan also possesses these abilities.

Lightweavers Shardplate is formed of creationspren.[9]

The Soulcaster enters (or partially enters) the Cognitive Realm to convince the sentience of an object to change materials, transforming it into something else if successful. Some transformations are more basic than others, with more complicated transformations requiring a more skilled Surgebinder and more Stormlight.

Lightweaving deals in illusions. It involves the manipulation of waves of sound or light and has a strong Spiritual component requiring a certain measure of Connection and a full mental picture of the desired illusion.

Due to a combination of their two Surges, Lightweavers have new, secondary effects, known as the Resonance.[10] Lightweavers may have multiple Resonances, with a prominent one being mnemonic abilities.[11][12] This includes the ability to deliberately memorize a scene, after which the Lightweaver can paint or draw that scene with remarkable accuracy.[13][14] The ability to memorize scenes and reproduce them accurately is similar to the ability of a Feruchemist to store memories in a coppermind,[15] in that both talents involve the removal of a memory from the mind and its replacement in another medium -- in the Lightweaver's case, a sketch rather than a coppermind. There is an upper limit to how many memories can be stored at once.[16] Members of this order generally do not have these mnemonic abilities before bonding a Cryptic and they are not something that Cryptics are necessarily interested in when searching for a person to bond with.[17] Lightweavers can experience light and color differently and may be able to minutely alter the mood of others.[18] It is also implied that they may able to create a solid illusion by combining their Illumination surge and their Soulcasting.[19][10]

“Yet, were the orders not disheartened by so great a defeat, for the Lightweavers provided spiritual sustenance; they were enticed by those glorious creations to venture on a second assault. ”

Lightweavers can be introspective, outgoing, or anything in between, but they are generally free-spirited. Most were interested in the arts, and the order included many artists, writers, musicians, and performers.[1][4] They had a keen appreciation for the value of beauty and entertainment, and felt that it was not enough if Roshar made it through the Desolations but lost such things.[4] Perhaps as an outgrowth of that belief, the Lightweavers seem to have taken some responsibility for maintaining morale among the Knights Radiant.[20] Some of them were interested in intrigue and secrets, and often served as the spies of the Knights Radiant. While their personal values were strong, they often had looser morals than the other orders. As a result of their inclination for subterfuge and more relaxed attitude, they were sometimes distrusted by others, particularly the Skybreakers.[4]

This article is still missing information. Please help The Coppermind by expanding it.
Retrieved from "https://coppermind.net/wiki/?title=Order_of_Lightweavers&oldid=145847"
Categories: