“The stories are wrong, aren’t they? We didn’t defeat the enemy for good, as the Heralds claimed. They lied. ”

—Dalinar to the Stormfather[1]

The Last Desolation, also known as Aharietiam in Vorin tradition and the Day of Glory in Azir,[2][3] is believed to be the last Desolation, when mankind's hard-won victory over the Voidbringers ended the cycle of Desolations. In reality, nine of the ten Heralds abandoned their Honorblades in an attempt to leave the Oathpact and avoid further torture on Braize. Talenel was the only Herald not to break the Oathpact. Dalinar Kholin visited this Desolation in one of the visions left by Honor. 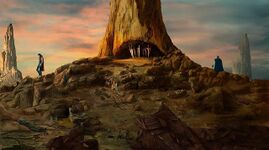 “A…a decision has been made. It is time for the Oathpact to end. ”

There was less than a year between the last two Desolations.[1]

During the fighting, only one Herald, Taln, who was the only one to have never broken under torture, died.[1] The surviving Heralds were afraid of the torture they would suffer on returning to Braize. Eight of the Heralds, all the survivors except Kalak, met at the appointed meeting place. Rather than return, they drove their blades into the ground and walked in different directions. Jezrien waited for Kalak to arrive and they both left as well. Although they had been warned remaining on Roshar would lead to a new Desolation immediately starting, Ishar believed Taln alone would be enough to uphold the Oathpact. Whether or not this is true was irrelevant to them by this point, as they only wished to avoid more torture. They chose to tell humanity that they had finally won, in hope that it might become true. [4]

The lie was uncovered 4,500 years later, when Talenel returned to announce the True Desolation.

According to Vorin tradition, mankind, led by the Heralds and their chosen knights, fought off the Voidbringers ninety and nine times, until finally, Aharietiam came and the Voidbringers were cast back into the Tranquiline Halls. The Heralds followed to force them out of heaven as well, and Roshar's Heraldic Epochs ended.[2] Songs and paintings depict the final conflict as a grand clash between lines of brave soldiers and giant monsters.[1]

This article is still missing information. Please help The Coppermind by expanding it.
Retrieved from "https://coppermind.net/wiki/?title=Last_Desolation&oldid=142797"
Categories: