Kredik Shaw, also known as the Hill of a Thousand Spires when translated from Terris, is the palace of the Lord Ruler of the Final Empire and is located in the center of Luthadel, between the Tin and Copper Gates.

It is built on top of the Well of Ascension by Rashek after he remodels the surrounding geography to hide the well from those seeking it in the mountains of Terris.

It has many peaked spires and sheer towers that rise high into the air, all of varying thickness. Some are large enough to contain large rooms and stairwells, and others are simply nothing more than thin rods of metal. There are no outer defensive walls surrounding the palace.

One part of the palace contains a large, domed room with many murals, including a mountain, a large cavern, a pool of light, and something very dark.[1] At the center of this room is a small, single-story building with a wooden door. Words are carved into the door, probably in the ancient Terris language. The stone of this building is carved with ornate, flowing patterns.[2]

Being in the area immediately around Kredik Shaw gives one a feeling of immense depression, as if a constant, strong Soothing were taking place. This is caused by the Lord Ruler himself. 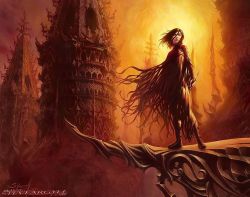 Kelsier and Mare once infiltrated the palace but were discovered and captured, resulting in them being detained at the Pits of Hathsin.[3]

After Kelsier escapes and re-forms his thieving crew, he and Vin infiltrate once again but are chased away by Steel Inquisitors, resulting in Vin being seriously injured.[4] They manage to retrieve a book from one of the rooms, which Sazed later translates.[2]

After Kelsier's death, Vin once again infiltrates the palace, making it to the Lord Ruler's lair before being captured by Kar. She is then taken to a holding cell before being escorted to a throne room to be interrogated by Kar to implicate and remove Tevidian as the head of the Steel Ministry.[5] After the execution she is returned to her cell before being freed by Sazed and Elend.[6] She then returns to the throne room and attacks the Lord Ruler with Marsh's help, eventually using the power of the mists to kill the Lord Ruler.[7]

Vin destroys the palace after becoming Preservation during her last fight with Ruin's remaining Inquisitors. Remnants of the palace are forced in to the ground inside a large crater caused by this event.[8][9]

This article is still missing information. Please help The Coppermind by expanding it.
Retrieved from "https://coppermind.net/wiki/?title=Kredik_Shaw&oldid=143198"
Categories: