The koloss are a bestial race of creatures on Scadrial, created by the Lord Ruler through the use of Hemalurgy.[1][2] During the time of the Lord Ruler, koloss serve as a powerful, fiercely loyal army to him, thanks in no small part to the fact that they can be controlled through the use of Allomancy by any powerful Mistborn or group of brass and/or zinc mistings.[3][4][5]

The koloss are physically very large and very powerful. Koloss have blue skin and red eyes.[6] A full-sized koloss could grow to be as tall as twelve feet. Koloss have a fixed amount of skin that does not change over their lifetime. Because of this, the younger a koloss is, the fatter it appears, due to having so much baggy skin covering itself. The skin itself doesn't hold terribly well to the koloss' body.[6] As the koloss grow taller, their skin tears and fits tightly to them. An ancient koloss will have little to no skin at all, being covered instead in leather wrappings.[7] A koloss continuously grows until its death. When it reaches about twelve feet, its heart can no longer sustain its body, and it dies shortly thereafter. 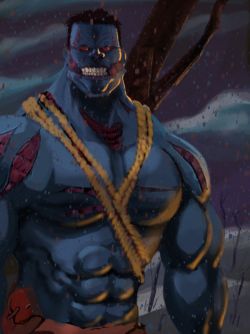 by zelloss
Human the koloss

Similar to Steel Inquisitors, the creation of a koloss is very brutal. To create a koloss, four humans are stabbed with individual iron spikes through their heart, and these spikes are then placed strategically on to a fifth person. Once placed, the spikes turn the recipient into a koloss "very quickly".[8] It is possible to create Hemalurgic constructs similar to koloss using animals instead of humans as a base.[9] It is possible to create sapient creatures similar to koloss from primates.[10]

The addition of four spikes containing the strength and a portion of the spiritweb of four other people causes them to grow in physical strength far beyond human limits as well as making it possible for them to continue growing in size until they can no longer physically support their own bodies and their hearts give out. The four spikes also have the effect of reducing their intelligence to almost that of a basic animal. These spikes can be reused, however they are subject to Hemalurgic decay, meaning that the power in the spikes diminishes with each re-use, which allows for more of the koloss' humanity to remain.[11]

The spiking, however, only affects them in the Physical Realm. When they appear in the Cognitive Realm after death, they look exactly like the humans they were before being spiked.[12]

When a koloss dies, other koloss in the vicinity attempt to collect and reuse the spikes from the dead one. This results in the koloss being able to reproduce in a manner of speaking, provided that they have someone to receive the spikes. The koloss are periodically supplied with fresh spikes and skaa captives to produce more koloss, but after the death of the Lord Ruler, they learned how to reproduce on their own; by harvesting the spikes from their dead brethren and re-using them.[13]

Because of this, after the Lord Ruler's control over the koloss ends, many of the koloss attack nearby human inhabitants in an attempt to make more koloss. When Vin visits a koloss camp, they request for her to give them more koloss. She does not know how, but they expect a human to be able to provide them with more koloss, since that is what they have experienced in the past.

In the post-Catacendre era, koloss became a self-reproducing species. When two koloss reproduce, the offspring are born koloss-blooded.They can also breed with human and produce koloss blooded hybrids. This means that they are physically strong, with a mottled granite-like complexion and blue skin.[14] A semi-offensive term for them is "kig".[15] Furthermore they continue to grow taller throughout their lives. They heal quickly and are often less intelligent than average. They become a full koloss once they accept the spikes.[16] Wax estimates Tarson to be young purely by his short but stocky frame.[17]

Koloss have four Hemalurgically charged iron spikes, which grant them increased strength. This allows them to wield their enormous blades, which are about the same size they are. The blades are blunt and not well made; koloss seem to rely on their brute strength to smash the blades into opponents, rather than any true technique. The Hemalurgic spikes, however, come with a price. In addition to twisting their bodies, the spikes also diminish a koloss' intelligence. However, they still retain the faint ability to reason, and the ability to communicate, and the re-use of spikes from dead koloss to create more resulted in koloss that retained more of their former humanity.[13]

Allomancers who are transformed into koloss will retain their Allomantic abilities, though they may not necessarily retain the knowledge to use those abilities.[18]

Because of their diminished intelligence, the Final Empire-era koloss live in barbaric tribes. Usually, social standing is determined by age, because as the koloss age, they get larger and more powerful.

Koloss are said to have two emotional states: boredom and rage. Because of this, their day to day lives are filled with milling about and fighting. When there is nothing else to fight near them, the koloss turn to in-fighting. Their blades can be used as a means of population control, as well as weaponry. If a koloss doesn't have a sword it feels is of adequate size, it will have to kill another koloss and take its sword. If there are extra swords, the koloss will expect their handlers to make more koloss to take up those swords, and if there are not enough swords, the koloss will kill each other for them until there are.

Most of the killing within a tribe is done solely on a whim, usually to get something the other koloss owns, or because some random glance or act has enraged one of the koloss.[6]

After the Lord Ruler's death, Jastes Lekal created some fake wooden coins and by "paying" with the coins, he recruited an army of koloss. The koloss carry the coins in a small sack and would kill each other for them.[6] This is probably caused by the reusing of the spikes which increases their intelligence to the point that they can understand economy values.

After Harmony's Ascension the koloss were transformed into a tribal race that could breed, which lived in the Roughs.[19] As a true breeding race, koloss raise koloss-blooded children. Those who chose can turn into full koloss at the age of twelve in a coming-of-age ritual where they choose to accept the requisite spikes or not. Those who do not accept the spikes leave, and live outside the tribe. Additionally, outsiders can choose to become koloss through this ritual.[16]

The changes in the koloss and their breeding subsequently allowed some koloss-blooded to become Allomancers.[20] How this is achieved is unknown, but koloss with the powers of Allomancy appear to be known in the Roughs enough to be recognized.[21]

Since the koloss are no longer required to fight for anybody, they are able to live longer lives. This allows for the development of koloss ancients, who have little to no skin at all. They are enormous, have no noses or lips, and their eyes appear to bulge. They survive only by wrapping themselves in leather to keep in their blood. While their intelligence is still at the level of the average koloss, they are looked after by the tribe and given respect similar to that of a tribal elder.[7]

This article is still missing information. Please help The Coppermind by expanding it.
Retrieved from "https://coppermind.net/wiki/Koloss?&oldid=145421"
Categories: