Kholinar is the capital city of the Kholin princedom in Alethkar, Roshar.[1] It's symmetrical in shape, built around enormous stone formations known as the windblades for their unmistakable shape.

It is the place where Talenel, Herald of the Almighty, announced to the world that the Desolation had come.[2]

Kholinar is considered one of the Dawncities and is sheltered from Highstorms. It is located in Northern Alethkar. It is considered beautiful in part because of the Windblades that jut up in and around the city.

Kholinar is one of the Dawncities, the most ancient sites on all of Roshar. Through the ages, it was rebuilt several times. It was the home of King Nohadon during one of the Desolations.[1] Following Sunmaker's death, it fell into the hands of one of his sons, the progenitor of House Kholin. During Gavilar and Dalinar Kholin's war of Alethi unification, it was conquered by the two brothers and subsequently became the capital city of Alethkar.[3]

Near the end of the War of Reckoning, Aesudan's negligence and Pai's accusations caused the city to erupt in riots. The Kholinar Wall Guard managed to restore order to the city and exiled all parshmen beyond its limits before the first Everstorm arrived. Soon afterward, the Fused gathered the transformed parshmen and began the siege of Kholinar. With high numbers of refugees coming in from the entire princedom and silence from the palace, the city quickly became overwhelmed, with various services collapsing and gangs roaming the city. The chief forces within Kholinar at the time were the Wall Guard and the Cult of Moments. In addition, the city was under the influence of two Unmade, Ashertmarn - who influenced the Cult of Moments and caused the breakdown of the Lighteye structures in the city, and Sja-anat, who corrupted the various spren.

While the city's defenses and command structure had all but collapsed, the Wall Guard had taken up its defense under the command of Highmarshal Azure. However, they were focused almost exclusively on the external threats. In the city, spren reacted strongly to any use of Stormlight, including spanreeds and soulcasters. This, along with the threat of Fused attacks, made outside communication impossible, and Soulcasting was only made possible by metal plates provided by Wit, seemingly made of aluminum, that prevented detection. The Guard's single Soulcaster was able to keep them and much of the city fed.

When the strike team, along with Azure, attempt to retake the Oathgate, a Thunderclast breached the walls and the Voidbringers broke into the city. While the team managed to reach the Oathgates, they were unable to activate it properly, and Kholinar was overrun.

This was the first time in modern history Kholinar had fallen to an invading force. Under the control of Voidbringers, tens of thousands of humans were moved out of the city to work on farms, while singers were moved in. The Voidbringers also began taking apart the palace. 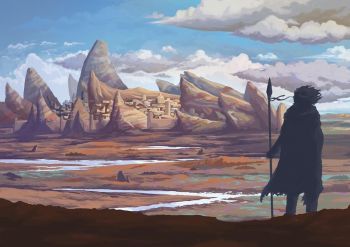 by Connor Chamberlain
A view of the city from outside.

The most notable feature of Kholinar are the windblades. They are massive rock formations, akin to giant fins, sticking out of the ground. They appear to be made of red, white, and orange strata, highly similar to the walls of Urithiru. Over the centuries, tunnels have been cut into them for quick and discrete passage through the walls. The windblades are wide enough for people to live atop some of them.[4]

The wall surrounds the entire city. It incorporates the windblades for much of its length, with man-made structures in the spaces between them. It is sixty-foot tall at its highest point and ten feet wide, with guard posts every three hundred feet. Each post is large enough to hold a platoon of soldiers.

The Kholinar Palace consists of the main palace complex, a garden, and the Monastery Dais, which is connected to the main building by a passage known as the Sunwalk. The Palace is situated in the northern portion of the city, on a plateau high above the rest of the building. This caused a set of unloading docks to be built at the bottom, to transport cargo to and from the palace.[5]

The original function of the Kholinar Oathgate has been lost to time. In the modern day, it is known as the Monastery Dais and serves as the headquarters of the Kholin ardentia. Buildings have been built on the Oathgate platform, including chapels and housing, although the original chamber, with its eleven lanterns and a keyhole, remains unchanged. The Oathgate is currently non-functional, as Odium forced Sja-anat to corrupt its spren.

The Impossible Falls are waterfalls located in a small park in the south-west portion of the city. It appears to be a private meeting place. It is said that when viewed from the correct angle, the water seems to flow down tiers and then back up to the top. Adolin Kholin describes them to Shallan Davar, telling her he would like to show them to her in person one day.[6]

A monument in the southwestern part of the city.[7] Little is known about this monument, but it is likely related to Lanacin the Surefooted.

A park in the northern part of the city that is named after the Sunmaker.[7] Little is known about the park.

The Ringington market is the market closest to Yokska's shop.[8]

A section of Kholinar under the Fused occupation, potentially existing before then. Nearby, quarried rock is being taken to build houses for the Makay-im.[9]

The Kholinar Wall Guard was tasked with patrolling the city wall and controlling gate access, but was crippled when most of the high ranking lighteyes disappeared into the Palace after the execution of an ardent and the subsequent riots. With no high-ranking lighteyes to take charge, a woman calling herself Highmarshal Azure seized control of the Guard and organized them to defend the city. With Ithi and her sister using the single remaining Soulcaster in a room lined with Aluminum provided by Wit, Highmarshal Azure was able to keep the Wall Guard fed and provide a sizeable amount of food for the common people of Kholinar.

They recruited any able-bodied fighter, using food and redemption to entice volunteers. Their primary focus was defending the wall from Fused raids, letting the city run itself for the most part. They used extra food to stop the other highlords from trying to seize control of the walls.

Kaladin was able to convince High Marshal Azure to lead six hundred of the Wall Guard to assault the palace.

The City Guard is the main peacekeeping force in the city. During the riots after the execution of Pai, the remaining city guard was recalled to the palace. Like other people who entered, most of them never returned, leaving behind only the personal forces of the highlords.

Elhokar and Adolin were able to recruit about a hundred of the highlords and their personal guards to join on the assault.

This was the force tasked with the protection of the royal family in the city and the palace. A portion of the Guards resisted the lure of the Unmade and were locked in a room within the palace complex. Upon their release, they claimed time seemed to pass differently for them, feeling it has only been a few days rather than weeks since the riots.

The cult is a new arrival, as it either appeared or revealed itself upon the beginning of the siege. They are divided into two groups. One group roams the street imitating corrupted spren, while the rest of the members hold feasts on the Monastery Dias. Ashertmarn, the Heart of the Revel, compels them to mindless hedonism. The cult takes new members easily, provided that they can bring them food. Shallan is able to join the revelers on the Oathgate platform by stealing and distributing it.

This article is still missing information. Please help The Coppermind by expanding it.
Retrieved from "https://coppermind.net/wiki/Kholinar?&oldid=144298"
Categories: