“ You think by facts. You change not on simple whims. You are as you are. ”

Inkspren are a race of sapient spren that dwell primarily in the Cognitive Realm of Roshar.[2]

They tend to be attracted to those who are logical and willing to think through their decisions, as opposed to acting on instinct.[3] They can form Nahel Bonds, giving people the powers of the Order of Elsecallers.[4]

Inkspren are humanoid, and their form does not change when entering the Physical Realm. They have angular features, more reminiscent of an unfinished statue than a real person.[1] In both the Physical Realm and Shadesmar, they are entirely black, as if made of shadows, and have marble-like skin with a prismatic quality as though it has been coated in a thin layer of oil.[5] In Shadesmar, their skin shimmers and gleams in a variety of colors depending on how the light hits it.[6]

They wear stiff, fashionable clothing that matches their shade and texture; the clothing is part of their essence.[7][6] They sometimes carry weapons like swords.[5] 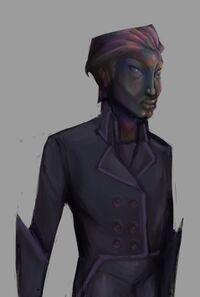 “ You think all humans are unstable. ”

Inkspren have a particular way of speaking, using "be" instead of phrases like "be here" or "exist" -- for example, "a spren is" rather than "there's a spren here", or "a traitor is" instead of "a traitor exists".[8][9] They prefer simple, limited body language.[1]

They dislike humans for their irrational and changing nature, and admire those among them who are willing to be cautious, logical and unemotional. Their society as a whole is hostile to the idea of reforming the Knights Radiant, believing that death is the only option for a bonded spren. It's implied they'd be willing to kill a bonded human to "rescue" their kinsmen from such a fate, even if the inkspren entered the bond willingly. There are very few of them interested in attempting the Nahel Bond again, with Ivory seemingly the only one to dare to do so.[1] It seems he is not entirely alone in his views, however, as several other inkspren accompany him to watch the beginnings of his bond with Jasnah.[5]

It's uncertain if inkspren have their own nation in Shadesmar, although they are very common in cities like Celebrant.[6]

Unlike other sapient spren, inkspren cannot shape-shift or make themselves invisible to humans while in the Physical Realm; they are, however, capable of drastically changing their size. They can become as large as a person and as small as a speck of dust, letting them move about unseen if they so wish.[1][10] They are also capable of blending into shadows.[5][7]

Inkspren are one of the spren types capable of forming Nahel Bonds with humans. The bond makes a person a Surgebinder, and grants the powers of Transformation and Transportation.[11]

This article is still missing information. Please help The Coppermind by expanding it.
Retrieved from "https://coppermind.net/wiki/Inkspren?&oldid=139670"
Categories: