“I am, unfortunately, the Hero of Ages. ”

—The first line of Sazed's note

Harmony is the name taken by Sazed after the Final Ascension and his acquisition of the Shards Ruin and Preservation. With the opposing forces of Preservation and Ruin both invested within him, balance and Harmony is achieved. It is unknown whether he took the name Harmony himself, or if it was later attributed to him by the followers of the Path. Three hundred years post-Catacendre the name is in widespread use by the inhabitants of the Elendel Basin and the surrounding Roughs.

“The point is Harmony, creating a way for as many as possible to make their own choices. ”

What this means in terms of exact intent is unknown, but as Harmony holds both Ruin and Preservation, his intent is certainly a blending of the intents of both. At one point he seems to indicate that his natural inclination as a former human being towards Preservation is somehow separate from his need as Harmony to balance the two forces. If Sazed had been unable to balance the two powers, the Shard's name would be different.[4] In his response to one of Hoid's letters he states that the Shards he holds are in such conflict that even simple actions are difficult.[5] It is possible for the Shard's intent to change from Harmony to Discord.[6]

Although Harmony allows free will, he is not beyond causing or allowing interference, as evident from having Ironeyes act as his agent, and communicating to Waxillium through an earring. He also controls the kandra, which act as his agents. 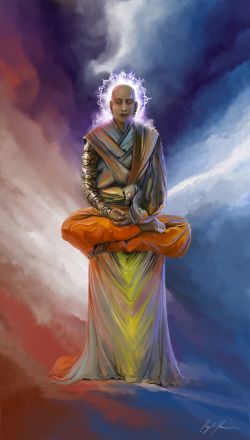 The Metallic Arts of Ruin and Preservation are still associated with their Shards, and thus with Harmony. No new magic systems are known to have come from Harmony.

Harmony holds both the shards Preservation and Ruin, and they have become intermingled. If Sazed were to die, the shard left behind would be Harmony, not Ruin and Preservation separately. It would require effort to split them back up again.[7]

Harmonium is the God Metal associated with Harmony.

“By the forgotten Gods! ”

—Sazed's reaction upon realizing the Terris prophecies referred to him[9]

After taking up the powers of both Ruin and Preservation at Final Ascension, Sazed proceeded to repair the damage wrought upon Scadrial by Ruin, and the clumsy efforts of Vin and Rashek to repair the world.[9] He accomplished this by using the information stored in his copperminds, which contained references to what Classical Scadrial was like. Unhindered by another Shard opposing his every action and limiting what he could do, he was able to restore Scadrial to the planet that existed prior to Rashek's ascension. Using the power of the Shards, he was also able to change the Koloss into a true breeding race.

At some point after Sazed's Ascension, Harmony received a letter from Hoid asking for help dealing with Odium. He wrote a response, in which he expressed surprise at some of the information Hoid shared and explained that the conflicting nature of Ruin and Preservation made it hard to act.[10][5] He also expressed a reluctance to help Hoid as they had never met and Hoid had hid himself before while visiting Scadrial, but agreed to consider the matter further if Hoid visited him openly.[11][12]

Some time later, Harmony wrote another letter to Hoid, detailing his attempts to contact other Shards[13][14] and sharing his concerns about both the damage Odium had already done[15][16] and about other Shards he could not sense potentially encroaching on Scadrial.[17] In response to these threats, he wrote that he was hoping to find a person to act as his "sword," someone who could act on his behalf when the conflicting nature of Ruin and Preservation make it near-impossible for him to act directly,[18] and asked Hoid to do his best to maintain Odium's prison until other Shards could be convinced to act and a plan could be made.[19]

Harmony is indirectly using Waxillium Ladrian by way of his earring as a pawn, doing his work in the Physical Realm. He assigned the kandra Paalm to play the human Lessie and protect Wax during his time as a lawman in the Roughs.[20] Paalm eventually removed one of her Spikes to avoid Harmony's control.[8] She took the alias of Bleeder and attempted to overthrow Harmony's control of mankind.[21][22] She was stopped by Wax who fired a Hemalurgic bullet into her skull, allowing Harmony to regain control of her.[20] Wax learned of Harmony's manipulation and felt used.

Later on, the kandra VenDell and MeLaan implied that Harmony was getting distracted and were worried that something bad was happening on Scadrial. Sazed confirmed this to Wax during their conversation after his temporary death, showing him a red glow around the planet from some unknown hostile force. Wax confronted Harmony about his interference and lack of assistance. Harmony explained that he could not always intervene because mankind would only ask for more help and always be dissatisfied. He gave Wax the option of moving on to the Beyond or going back.[23]

This article is still missing information. Please help The Coppermind by expanding it.
Retrieved from "https://test.coppermind.net/wiki/Harmony?&oldid=141960"
Categories: