This page or section contains spoilers for Rhythm of War!
This information has the ability to potentially ruin elements of the plot for the reader. Proceed with caution if you have not read this book.
This page or section needs to be updated with new information for Oathbringer and Rhythm of War!
Be aware that in its current state, it may not include all additional content yet.
For an index of all known glyphs, see Glyphs/Index.

Glyphs are a writing system used on Roshar for basic communication, artistic expression, and religious practices. Individual glyphs represent specific ideas. They are typically symmetrical and can be rendered with varying degrees of stylization. Two glyphs may be combined into a glyphpair, forming a word distinct from the constituent glyphs. Glyphs and glyphpairs are often designed as pictographs so that literacy is not required for comprehension. The writing system is not structured to facilitate the composition of sentences or more complex communication.

The usage of glyphs may predate even the Heraldic Epochs, as they can be found inscribed, along with other patterns, on the Honorblades themselves.[1] They came into common usage among humans during the Era of Solitude and are said to have been given to the Rosharans by the Dawnsingers.[2] Glyphs seem to have a common origin with Thaylen script, due to the presence of many similar graphemes. Though women's script became the primary writing system used in Vorin nations, glyphs are still used in many contexts.

Glyphs are inexplicably tied to the Heralds and Knights Radiant. The "ten fundamental glyphs" are derived from or related to the "swordglyphs" of the honorblades and the the Knights Radiant orders.[3]. These specific glyphs also appear on some Shardblades, like Sunraiser.[4] Upon speaking new oaths or taking certain actions, similar glyphs may naturally appear around a Knight Radiant, formed out of frost or mist. When Shardplate was worn by Radiants before the Recreance, it had glowing glyphs etched into the Plate that trailed vapor with color corresponding to the Radiant's order.[5] These have since vanished for unknown reasons.[6] Some of these glyphs were known in the Era of Solitude, and others were not.[citation needed]

Glyphs are used for both basic communication and religious or artistic expression. Due to Vorin cultural prohibitions, men are not permitted to learn women's script and become fully literate. They are, however, permitted to use glyphs for the purpose of simple written communication.[7] Lighteyed men, and some high nahn darkeyed men, may learn to read and write glyphs as part of their education, enabling them to identify glyphs that aren't portrayed pictographically and to interpret glyphpairs more readily. Despite this, men writing or drawing glyphs is still considered unmasculine or even blasphemous to some, especially among the lower classes. Educated women also learn to read and write glyphs, with greater emphasis than men on calligraphic ability.[7] This is particularly important as women are traditionally responsible for religious activities which involve writing glyphs.[8]

Shops often use glyphs and glyphpairs to indicate which type of goods are available for sale. For example, bookstores may display the glyphpair for "book", stylized into the shape of a book so that even illiterate servants will recognize it as a bookstore.[3] Signs may also be used to indicate specific items for sale as well as associated prices.[9] Books, folios, and scrolls intended for men may use glyphs and glyphpairs, along with images. Textbooks use glyphpairs to designate body parts in anatomical diagrams[10] while a guide on Shardblade stances may use glyphs to indicate specific movements.[11] These will often be accompanied with women's script for further clarification. While official documents may make use of glyphs, they are typically written with women's script.[12]

Highborn lighteyed families often have a distinct glyph and glyphpair. For example, the Kholin family uses the "khokh linil" glyphpair; stylized as a tower and a crown, this crest appears on the armor, clothing, and banners of Dalinar's army and servants.[13] Maps of the Shattered Plains use these glyphs and glyphpairs to indicate ownership of camps and plateaus.[14] Slaves are branded on the forehead with a glyphpair of the district in which they were enslaved, to signify their new caste. The addition of a "shash" glyph brand, marking a dangerous slave, can make it difficult to get a good price for the slave.[15] Upon earning their freedom, slaves may opt to cover these brands with a tattoo, including glyphs that reference the record of their release.[16] 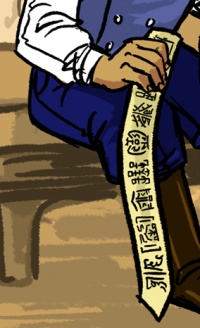 Glyphs are also pervasive in decorations and religious practices, where they tend to be portrayed in a very stylized manner. Greater value is placed on beauty and aesthetics than on making the symbol easily recognizable. Glyphs are occasionally used on clothing for decorative purposes. For example, Alethi women sometimes wear dresses patterned with glyphs.[17] The doors into the Palanaeum are adorned with a beautiful carving of intricate glyphs.[18] When the freed members of Bridge Four chose tattoos to cover their slave brands, they opted for a purely decorative "bridge four" glyphpair to be added.[16] Even the Parshendi have been known to occasionally carve strange, unfamiliar glyphs into their daggers.[19][20]

Sometimes these decorative glyphs my also take on a religious nature. In Vorinism, glyphs are often sewn into fabric or painted with a flammable ink. These "glyphwards" are then burned as a prayer. Young women may wear a "bride's prayer" on their sleeves prior to engagement, and soldiers may wear glyphwards into battle for luck and safety.[21][22] Some even tattoo themselves with glyphs intended as a prayer.[23] Women are typically responsible for drawing glyphwards for their families, though they may also be purchased at luckmerches and apothecaries.[24][12] While the practice of glyphwards is common in Vorin nations, some consider the practice to be superstitious.[24] More pagan beliefs also surround the use of glyphs. For example, some believe that extrapolations of the "tenth glyphic paradigm" can be used to determine one's personality.[2]

Stormwardens must perform calculations and a great deal of research to determine the coming of future highstorms. As men are permitted to become Stormwardens, their books and notes are written with glyphs.[25] While this extensive writing and prediction is generally considered taboo in Vorin nations, the skill is too valuable for the practice to be forbidden. Few are aware of how this system of writing works because of the secretive nature of the Stormwardens and the surrounding controversy. When no suitable glyphs exist to convey a certain word, Stormwarden script combines the pronunciation of multiple glyphs to phonetically reproduce the desired word. This phonetic usage is indicated by underlining the component glyphs.[26] 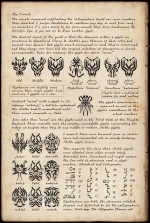 by Isaac Stewart
The first half of a letter and in-depth discussion of Alethi glyphs. 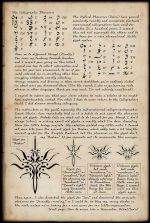 by Isaac Stewart
The second page of a letter discussing Alethi Glyphs.

Glyphs can be seen written in three different ways: a standard, block form that highly resembles Thaylen script; a calligraphic form, in which the glyph may be altered significantly for heightened aesthetics; or a radial form, where the glyph is drawn repeatedly with radial symmetry about some point.[27] They typically have bilateral symmetry[3], matching the symmetrical pronunciation of the sounds they represent. In some cases, glyphs appear to be composed of distinct phonemes representing consonants.[27]. There are two styles of phonemes: standard and calligraphic. The standard set of phonemes are illustrated in a letter from Nazh concerning his investigation of the Calligraphers Guild.[28] While these phonemes are used in the design of new glyphs, many liberties may be taken in how they are utilized. As glyphs evolve in usage over time, these phonemes are often distorted, combined, or lost such that they are no longer identifiable. The phonemes often bear resemblance to the characters of Thaylen Script. When phonemes are apparent, they appear to be pronounced outward and down from the center and top of the glyph.

The component phonemes are not always readily discernible. Glyphs are often drawn in complicated ways that make it difficult to identify what they are unless a person knows what they are looking for.[19] Lines are often added, removed, or contorted. In order to draw glyphs, one must have a deep understanding of how the glyph may be expressed without overly obscuring the meaning.[29] Additionally, glyphs are often drawn as pictographs--visually depicting the word it represents. This is done so those who cannot read glyphs may still understand what they mean.[7]

A glyph's appearance and design can change over time. Because glyphs are typically memorized rather than read, a particular glyph's original phonemic roots might even get lost as it evolves. For example, this is how the glyph for "storm" (zeras) developed throughout Alethi history[28]:

It is slightly more common to find pairs of glyphs being displayed together than individual ones.[28] Such "glyphpairs" can symbolize a variety of entities and concepts.

For a table of known numeral glyphs, see Glyphs/Index#Numerals.

Glyphs may also be used to represent numbers. A base ten number system with a semblance of positional notation is used.[37] Numerals are written with bilateral symmetry and may be stylized for artistic or aesthetic purposes. It is unclear whether these glyphs are used only in Vorin nations or throughout Roshar.

The names used for the numbers does vary, even among the Vorin nations. In Vorin usage, the words for numbers one through ten are derived from the names of the ten Heralds. Each is also assigned a suffix, and the names of larger numbers are created by combining these suffixes. Thus the number "1173" is "Jesesabach", using Jes (1), -es (1), -ab (7), -ach (3).

This article is still missing information. Please help The Coppermind by expanding it.
Retrieved from "https://coppermind.net/wiki/Glyphs?&oldid=143424"
Categories: