“ Names didn't mean a whole lot in the Forests. Or maybe they meant everything. The right ones, that was. ”

— Daggon on the Forests of Hell[1]

The Forests of Hell are forests on a Shardworld known as Threnody.[2]

The Forests of Hell are inhabited by shades, dangerous spirits capable of turning people into a new shade with a single touch. In order to protect themselves, humans developed the Simple Rules that were believed to help a person avoid the shades. Traveling in the forests, especially at night, is extremely dangerous.[1] 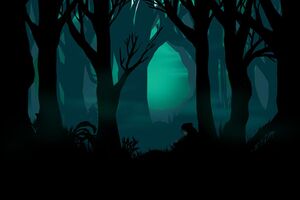 The people who live in the Forests often build forts to live within, to protect themselves from the shades.[1] Unfortunately, most of the fortfolk who left the forts, such as merchants, did not have the skills necessary to survive for long in the Forests. Those who live in the forts dressed differently than those without, wearing clothing such as tall hats with a wide brim, or long black coats with lace at the front. The fortfolk impose taxes on the people who live in the forests, but people often avoid those taxes by fleeing into the Forests. Fortfolk post bounties for these criminals, which bounty hunters, such as the White Fox, hunt down in exchange for measures of silver.[1]

Waystops were built as well, neutral places in the forests, such as Silence's waystop. These waystops serve as safe zones for travelers in the Forests. There are also some homesteads that have been established.[1]

Fugitives from justice often flee to the Forests, often going by aliases. Those who survive in the Forests are invariably tough and self-reliant. The weak or foolish don't survive longer than a few weeks.[1]

For a full list see, see :Category:Residents of the Forests of Hell.

This article is still missing information. Please help The Coppermind by expanding it.
Retrieved from "https://test.coppermind.net/wiki/?title=Forests_of_Hell&oldid=134053"
Categories: