This page or section contains spoilers for Rhythm of War!
This information has the ability to potentially ruin elements of the plot for the reader. Proceed with caution if you have not read this book.

“It was agreed that we would not interfere with one another, and it disappoints me that so few of the Shards have kept to this original agreement. ”

Endowment is one of the sixteen Shards of Adonalsium. The Shard's Vessel is Edgli.[1] She is located on Nalthis, and is the only Shard present there.[3]

Endowment's intent is not entirely clear; it's likely related to giving or bestowing gifts or talents upon others. The intent does not seem to influence Edgli in all matters, as she is still capable of refusing giving aid to Hoid.[4] The prime example of the intent's influence is in the magic system of Awakening, as Breath can only be given, and cannot be forcefully taken.[5]

Notably, Endowment is the Shard Hoid would have taken if he wanted to become a Vessel.[6] 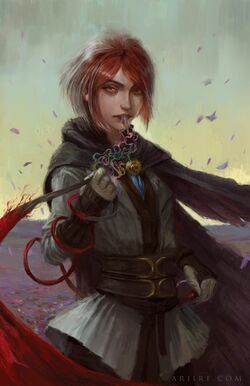 by Ari Ibarra
An Awakener using her Breath

Nalthis' only known magic system is Awakening -- the use of Breath, Endowment's Investiture in its gaseous form, to enact a variety of effects, typically tied to animating inanimate objects. Every Nalthian is born with a single Breath, and can bestow it onto other people or objects. Giving away one's Breath makes one into a drab, which makes a person prone to depression and sickness.[7] By contrast, holding more Breath grants a variety of benefits, the number of which increases with the number of Breaths held; the tiers of acquiring new abilities are called Heightenings.[8]

Breaths are bestowed upon others with Commands. The primary command is "My life to yours. My Breath become yours." However, hundreds of other Commands can be used to bestow Breath onto inanimate objects or dead bodies, Awakening them. Awakened objects perform specific task, dictated by their Commands, which can range from simple, such as "hold when thrown" to complex, such as "fetch keys".[9] The more complex the Command, the more Breath it requires.[10] Additionally, animating objects with Breath requires color; a nearby source of vivid color is required, and will be bleached, in order for the Command to take effect.[10]

Breaths can also be used to manipulate and store memories, although specifics of how are unclear.[11][12]

Divine Breath and the Returned[edit]

“He remembered a voice, calm and comforting, offering him an opportunity. To Return. ”

Endowment can create splinters of herself called Divine Breaths, and bestow them upon the recently deceased.[14] This brings them back to life; such people are known as the Returned. The Returned have little to no memory of their previous life, but they do retain any skills they've had while alive.[15][16] Their appearance also changes, in accordance to how they perceive themselves and the influence of local culture on their image of a "god". With some skill, the Returned can change their appearance to some extent, though it is no true shapeshifting.[17]

The Divine Breath immediately grants the Returned the effects of the Fifth Heightening. However, the Returned must consume at least one Breath a week; otherwise, after their Divine Breath is consumed and, with nothing to support their existence, they die.[18] Endowment does not discourage this, and is fine with her Breath being used to feed the Returned.[19]

They can also choose to bestow their Divine Breath upon others, which typically results in a massive feat of power, often tied to healing, though it will kill the Returned.[20] Giving up their Divine Breath is often the reason they were Returned in the first place -- a potential Returned is shown a vision of the future by Endowment, and chooses to come back based on that, although the memory of it fades away until it is needed.[13]

The Tears of Edgli are a special flower that grows only in Hallandren, near Endowment's perpendicularity.[21][22] They come in a variety of colors and make for extremely good dyes; they are also more efficient when used as a source of color for Awakening.[23] This is because, having grown near the perpendicularity, the Tears contain some of Endowment's Investiture seeping out of the ground.[22]

Endowment has some capacity to perceive the future and bestow those visions upon others; she communes with people as a disembodied voice to do so.[13] She also has the ability to smite people on her planet.[24] Perhaps related to this, she appears to have keen awareness of who enters and leaves Nalthis; she can detect Hoid's presence while other Shards have trouble spotting him on their own worlds.[25] 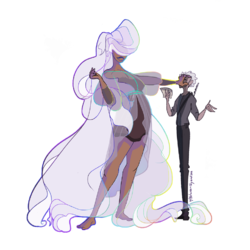 “If Rayse becomes an issue, he will be dealt with. And so will you. ”

At some point, unknown amount of years or centuries later, the people of Chedesh landed on the shores of the land that now houses Hallandren. It was then that Endowment first created a Returned in Vo, who managed to have five Visions and father a child before dying a week later. From then on out, Returned began appearing in other parts of the world.[28] Among others, Endowment Returned the Five Scholars, including Vasher and Shashara, who together created Nightblood, and Lightsong, who saved the Hallandren from a continent-wide war by restoring the power of the god-king.[29][13]

Around the time of True Desolation on Roshar, Hoid began contacting various Shards in an attempt to build a resistance to Odium, then held by Rayse. Endowment, still annoyed at the Vessels who chose to settle down in pairs in violation of the original pact, declined.[2] Believing Rayse to be of little concern, she chided Hoid for dabbling with matters far outside his scope, and suggested that if Odium were to become an issue, he would be dealt with promptly -- as would Hoid himself.[30]

Some time later, Harmony contacted Endowment at Hoid's behest. She was willing to communicate, though it's unclear what precisely she had told him.[31]

Despite being Nalthis' only Shard, the planet's inhabitants seem by and large unaware of her existence, even through religion. Of the known cultures, only the Pahn Kahl have any knowledge of her; and even then, she is known only as the voice that brings back the Returned.[32] While the people of Idris are monotheistic, their god, Austre, is not based on Endowment.[33]

Regardless, she is capable of influencing Nalthis through her Returned. She communicates with select few dead as a disembodied voice, and presents them with chosen visions of the future before asking them to Return and act on this vision. Although the Returned come back amnesiac, their memories do come back when needed.[13] Through this, Endowment can indirectly steer the course of history; most notably, Returning Vo caused the creation of Hallandren and Returning Shashara led to the creation of Nightblood. Endowment also had some additional level of involvement in Nightblood's creation, above simply her Investiture being used.[34]

Despite her involvement in Nalthis, Endowment appears to be uninterested in reaching beyond the planet and meddling with the greater cosmere.[35]

This page is probably complete!
This page contains most of the knowledge we have on the subject at this time.
It has yet to be reviewed.
Retrieved from "https://test.coppermind.net/wiki/Endowment?&oldid=142806"
Categories: