“At some point in the distant past, both Devotion and Dominion were destroyed. Their Investiture—their power—was Splintered, their minds ripped away, their souls sent into the Beyond. ”

Dominion is a Shard of Adonalsium once held by Skai.[4][5] After the Shattering, they traveled to Sel with Devotion, where both were Splintered by Odium.[6][3]

Since Dominion was destroyed well before any other known events on Sel,[7] it is somewhat unclear exactly how the Shard's intent would drive its Vessel to act. The only trace of them are their splinters, skaze, which are thirsty for power as a result of their relationship with the Shard, and driven to maintain influence over politics of Fjordell.[8] This suggests that Dominion's focus was amassing and maintaining control over others. 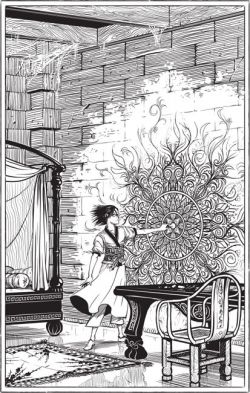 by Ben McSweeney
Forgery in action

When Odium Splintered Devotion and Dominion, he locked their power in the Cognitive Realm to prevent them from gaining another Vessel. The power of the two Shards is thus trapped together as a giant, polarized storm of Investiture, known as the Dor, which makes the Cognitive Realm around Sel very dangerous.[9][3] This has a profound effect on the magic systems of Sel.

Since the powers are trapped together, all magic systems are influenced in some way by both Shards.[1] Perhaps more importantly, because location exists in the Cognitive Realm, magic is tied to the user's physical location.[10][3] In order to access a magic system, it also appears one must be from the land associated with that magic system.[11] All the magic systems of Sel share reliance on shape; specific shapes, based on the homelands of the magic systems, are used to access the Dor and thus perform magical effects.[12][13]

Magic systems fuelled by the Dor include AonDor (from Arelon), ChayShan (from JinDo), Dakhor (from Fjordell), Forgery (from MaiPon) and Bloodsealing (from Dzhamar). The power of them grows weaker the further one is from the "home ground" of the magic system.[14] However, they still have considerable range -- for example, Forgery and Bloodsealing are usable throughout the entire Rose Empire rather than only in their home regions.[13]

The skaze are splinters of Dominion, and consider Skai as something of a god or parent.[15][16] The skaze are in some ways an inverse of the seons, though they assume similar shape and size -- round, about as large as a melon. Unlike seons, they are all black, seeming to suck light from their surroundings rather than emitting it. They also lack an Aon in their center; rather, they are ringed by a pattern of misty symbols. They are reliant on humans, though it's unclear precisely how.[17]

Skaze are power-hungry and controlling. They maintain a heavy level of influence over the politics of Fjordell, and were at least partially involved in the plan to wipe out Elantris.[8][14] The exact powers they possess is unknown.

Dominion's Investiture seems to be allowing Wyrn Wulfden the Fourth some ability to see the future.[18] 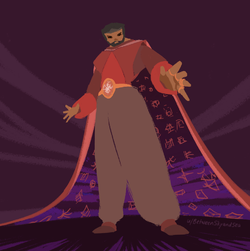 “It is a pity about Aona and Skai, but they were foolish—violating our pact from the very beginning. ”

Little is known about the early history of Dominion. The Shard was created at the Shattering of Adonalsium and taken up by Skai who, for unknown reason, took it to Sel alongside Aona's Devotion.[20][3] They were not heavily involved in the creation of local cultures; however, they still ended up passively influencing them. Eventually, Odium came along and splintered both Shards, effectively killing them.[3]

Following their destruction, the Investiture of Devotion and Dominion was pushed into the Cognitive Realm, creating the Dor. Though this was done to prevent the power from ever finding its way into hands of sapient creatures again, it seems as though the Dor itself has begun to attain sentience.[3]

“May Jaddeth grant me success. ”

Though the two Shards of Sel weren't directly involved in the human civillizations of the planet, the discovery of their powers drove their development regardless. The magic systems they inspired were fundamental in the development of local writing systems and languages, and heavily impacted the local cultures.[3] In the present times, this influence is most pervasive in the form of Shu-Dereth, the state religion of Fjordell, though its god Jaddeth is also slightly inspired by Devotion.[5]

Though it's unknown how much -- if anything -- of Dominion's original self remains, they continue to have magical effects on Sel. As Dor, they make the Selish Cognitive Realm exceptionally dangerous to travel through.[3] Their splinters, the skaze, continue to have political power over Fjordell.[8]

This page is probably complete!
This page contains most of the knowledge we have on the subject at this time.
It has yet to be reviewed.
Retrieved from "https://test.coppermind.net/wiki/Dominion?&oldid=141497"
Categories: