“One does not war with Cryptics, as one does honorspren. Cryptics have but one city, and do not wish to rule more. Only to listen. ”

Cryptics are a race of sapient spren that dwell primarily in the Cognitive Realm of Roshar. They are sometimes referred to as liespren.[2]

Cryptics are the personification of the underlying mathematical truths that govern Roshar and the Cosmere.[3] They are also one of the spren capable of forming Nahel Bond, granting the abilities of the Order of Lightweavers.[4]

In the Physical Realm, Cryptics manifest as complex fractal patterns that are constantly shifting, slightly raised off a surface or object.[2] On occasion, they can also manifest as a floating three-dimensional mass of twisting lines.[5] Their voice has a buzzing quality, and they vibrate when they speak.[6] They also tend to hum a lot.[6]

In Shadesmar, Cryptics take the form of tall, willowy figures in too-stiff robes that hang off them as if made from glass rather than fabric. Above their collars, where a human's head and face would be, they have a floating symbol full of impossible angles and geometries.[7] Different individuals have slightly different head patterns.[8] Despite not having any apparent means to do so, they are capable of hearing, seeing and speaking as well as any other spren.[3] 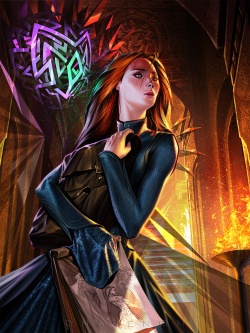 by Petar Penev
Pattern following Shallan in the Palanaeum

“There were very few survivors. The one you call Stormfather lived. Some others. The rest, thousands of us, were killed when the event happened. ”

It's unknown whether the Cryptics were created deliberately by a Shard, or if they arose naturally from Roshar's loose Investiture. During the Heraldic Epochs, they, like many other sapient spren, began forming Nahel Bonds with humans to mimic Honorblades, leading to the creation of the Order of Lightweavers.[10] During the Recreance, the vast majority of the older Cryptics died, leaving none alive to remember how the Nahel Bond worked.[9]

Over time, the Cryptics managed to recover somewhat, and by the late Era of Solitude, they ruled over one of the largest cities in Shadesmar, although they did not stray far from it often.[2][1] At some point, they were engaged in some sort of political disagreement with the honorspren, possibly related to the latter's attempt to conquer Shadesmar.[11][1]

Cryptics were one of the first spren groups to begin bonding humans again in anticipation of the True Desolation. Among others, they sent Testament to bond with Shallan when she was only a child, as well as another Cryptic to bond with Tien, although only the former managed to bring the Bond to fruition, after long setbacks.[12][13]

A group of them have been following Shallan for some time prior to her bonding Pattern.[7] They also watched over Elhokar, unwittingly feeding his paranoia.[14] They eventually sent another of their kind to bond with the king; however, Elhokar was killed before he could finish saying the First Ideal, and that Cryptic ended up bonding with Hoid instead.[15][16]

“Cryptics like to plan. They debate and watch and never do anything. ”

Cryptics are not very common in Shadesmar, with the vast majority of their population living in a single city, one that enjoys some renown.[2] Unlike the honorspren, Cryptics do not have any inclination to conquer more territory, so other types of sapient spren do not war with them.[3] Although they have a fearful reputation among other types of spren,[2] they themselves are content with listening and learning.[1] 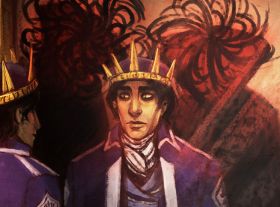 by Sheep
Cryptics watching over Elhokar

Nonetheless, many other spren find Cryptics weird and discomforting due to their fascination with lies and their mathematical approach to everything.[1][3] They are also known for their fondness for planning, as well as being largely passive and inactive. Once they put their mind to something, however, they commit to it.[17] They seem to have a significant influence on the Shadesmar politics, as when they began to bond humans again, others, like cultivationspren, swiftly followed suit.[18]

They are known for enjoying lies, gathering around and humming among themselves wherever a falsehood is uttered, although they don't like being called "liespren".[1][2] Despite this fascination with falsehoods, Cryptics themselves are bad at lying in general.[19] They are exceedingly honest, and it seems as though only through bonding with a human can they learn to use less straightforward ways of communication, such as sarcasm and humor.[12] They seem to prefer keeping together in groups rather than going off on their own.[8]

Cryptics as a whole are supportive of their members bonding with humans, with Pattern doing so with the approval of his peers.[20] Because of the Recreance, many of them believe that such a bond is a death sentence, yet they also think that the things they could learn from humans are worth it.[21] Unlike most other spren, Cryptics do not leave their bonded kinsmen to navigate the Nahel Bond entirely alone. Rather, they accompany the would-be Lightweaver from Shadesmar, observing them and their budding bond.[7][14] It's possible that the decision of who to bond is made by a committee among them, rather than by individuals.

Cryptics have their own language, which consists of fast clicking sounds.[19] They can also speak equations in intonations, being able to communicate different Cryptics' names with the same word, Pattern. Since non-Cryptics cannot do this, the Lightweavers have had to convince them to adopt names other than Pattern.[22]

Cryptics consider themselves to be more of Cultivation than Honor.[23] 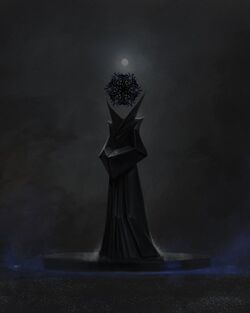 by Caio Santos
A Cryptic in Shadesmar

Cryptics are one of the few spren types capable of forming a Nahel Bond with humans. They grant their partner the power of Surgebinding with the Surges of Illumination and Transformation, making the person a Lightweaver.[24] Past a certain point, a bonded Cryptic gains the ability to transform into a shape-shifting Shardblade.[25]

Unlike most Nahel Bonds, a Cryptic bond is progressed by uttering deep, personal truths about oneself by the bond holder, with the more powerful, impactful truths deepening the bond further.[26] The Cryptics' particular affinity for truths extends further than that, as they are able to sense when a person is lying.[1]

Cryptics are also able to let their Lightweavers peer into the Cognitive Realm. For inexperienced Surgebinders, they act as intermediaries in Soulcasting, relaying the words of souls to them.[27] In fact, Cryptics have prodigious translation abilities, and seem capable of understanding any language, human on spren, with enough exposure.[8][28] They are also adept codebreakers, a talent stemming from their in-depth understanding of mathematical patterns.[5]

While in the Physical Realm, they can affect it in minor ways, allowing them to pick locks.[29] Unlike other types of sapient spren, like honorspren or ashspren, Cryptics seem unable to turn invisible, meaning they have to hide in their environment to remain unnoticed.[30]

This article is still missing information. Please help The Coppermind by expanding it.
Retrieved from "https://coppermind.net/wiki/Cryptic?&oldid=140214"
Categories: