Alcatraz Versus the Evil Librarians

For a complete chapter by chapter summary, see /Summary.

Alcatraz Smedry is an orphan boy with a propensity for breaking things. On this thirteenth birthday, he receives a package, purportedly from his parents, containing his inheritance: a bag of sand. He also burns down his foster parents' prized kitchen.

His case worker, Ms. Fletcher, arrives and informs Alcatraz that he will be placed in yet another home the next day. Unbeknownst to Alcatraz, she is actually a Librarian and has stolen the sand.

The next day, a loony old (but spry) man claiming to be his grandfather shows up and asks about the sand. When he learns that a Librarian has stolen it, they hurry away to try to recover it. The sands are rare and can be forged into powerful Lenses. Alcatraz doesn't believe the man is his Grandpa, but he decides to go along with him after some guy shows up and tries to shoot him.

Alcatraz meets two cousins, Sing Sing Smedry and Quentin Smedry, who have the Talents of tripping and talking gibberish, respectively. Alcatraz learns that his penchant for breaking things is actually a powerful Talent that he can learn to control. They all decide to infiltrate the evil Librarian fortress (the local library) to recover the sand. Bastille, a Crystin Knight about Alcatraz's age assigned to protect the Smedrys, is furious at such a reckless plan, but she has no choice but to follow along.

Sing creates a distraction by tripping and falling in the library, and the team heads into the employee entrance. They split up and search for the sands, but they are all eventually captured by the Dark Oculator Radrian Blackburn and Ms. Fletcher. While Grandpa is tortured for information, Alcatraz and the rest of his crew escape from their prison and go to help. Fortunately, Grandpa is using his Talent of arriving late to postpone the pain and Quentin is just talking gibberish, so nothing has been revealed so far.

Alcatraz creates a distraction and rescues Grandpa, but Blackburn comes back, revealing that the Sands of Rashid have already been forged into Lenses. He and Grandpa have an Oculator's duel, which Blackburn wins, but Alcatraz tricks Blackburn into using the Firebringer's Lenses on himself, allowing them to grab the Lenses of Rashid and escape. 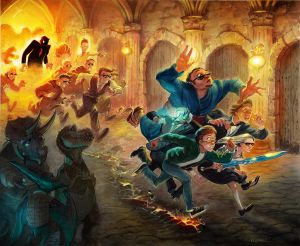 The plot of the book revolves around the title character and a small group of freedom fighters operating against the cult of evil Librarians that secretly rule the world. These freedom fighters include Alcatraz's grandfather, Leavenworth, usually just referred to as "Grandpa Smedry"; Bastille, Grandpa's bodyguard and a Crystin Knight; Sing Sing (Sing for short), Alcatraz's Mokian cousin; and Quentin, another cousin. The Librarians include Shasta Smedry/Ms. Fletcher, Alcatraz's case worker, who turns out to also be Alcatraz's mother, and Radrian Blackburn, a Dark Oculator.

In the course of the book, it is revealed that Alcatraz's biological family -- and those that marry into the family -- all have Talents that would normally be annoying and frustrating human weaknesses. For example, they include losing things, breaking things, being a bad dancer, and always arriving late. As the Smedrys gain control over their Talent, they can use them to great effect. For example, Alcatraz can break a gun pointed at him.

Dreamworks Animation SKG acquired the film rights to Alcatraz Versus the Evil Librarians in June 2008.[1]

For a cover gallery of Alcatraz Versus the Evil Librarians, see /Covers.

This meta article is still missing information. Please help The Coppermind by expanding it.
Retrieved from "https://coppermind.net/wiki/?title=Alcatraz_Versus_the_Evil_Librarians&oldid=139794"
Categories: